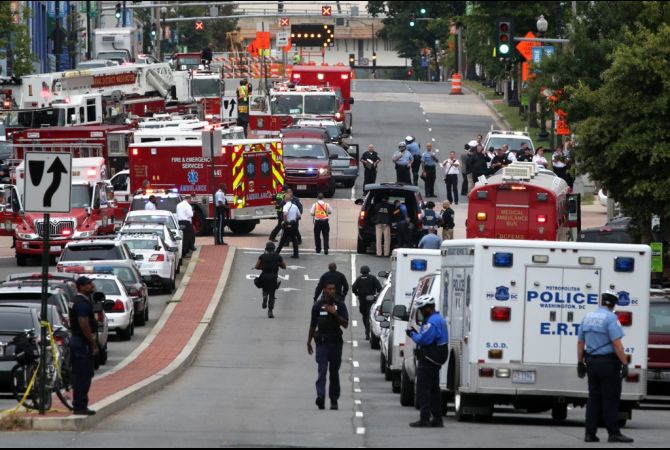 On Monday, September 16, thirteen people were killed when a gunman opened fire at the Washington Navy Yard. While initially suspecting two shooters, authorities have now stated that this was that act of one shooter, identified to be Aaron Alexis.

In addition to the thirteen killed, eight people were injured during the shooting, three of which were shot. Among those three victims was Metropolitan Police Officer Scott Williams, who has been reported to be doing well. The remaining five people were injured because of stress-realted injuries or because they had fallen in the ensuing chaos. At the moment, no motive is known, but Mayor Vincent C. Gray believes that there is no reason to believe the incident to be an act of terrorism.  However, authorities have stated that they are not ruling out the possibility.

The shooting started around 8 am Monday morning, beginning at the headquarters of the Naval Sea Systems Command.  The 3,000 workers initially believed the gunfire to be construction work, but the realization set in quickly. Alexis was said to be shooting from a fourth story overlook, directing his fire into the cafeteria on the first floor. After everyone was evacuated, Senate buildings on Capitol Hill went on lockdown in addition to ten public and charter schools. The flights out of Reagan National Airport were also briefly delayed.

Alexis, a former Navy reservist, had struggled with mental-health problems and personal issues prior to the attack. While he had told medical facilities that he was not depressed or planning to harm anyone, he admitted to Rhode Island police a few weeks ago that he was hearing voices in his head. Navy officials dismissed his statement.

Regardless of his mental-health problems, Alexis was granted a security clearance, which is now being investigated by law enforcement. According to Washington Post, nearly 5 million federal workers hold secret clearances, making it difficult for security measures to report suspicious behavior.

However, washingtonpost.com says that Gene Barlow, a spokesman for the ODNI’s Office of the National Counterintelligence Executive, stated, “We do act on derogatory information that we receive, with regard to security clearances.”

Because of the system, law enforcement must rely on the co-workers of troubled workers to report any disturbing activity. A mechanism that could potentially alert the Pentagon of unusual activity is in the process of being developed. However, because there is no concrete reason to suspect an employee, the system could also drive away important information regarding the security and stability of the employees.