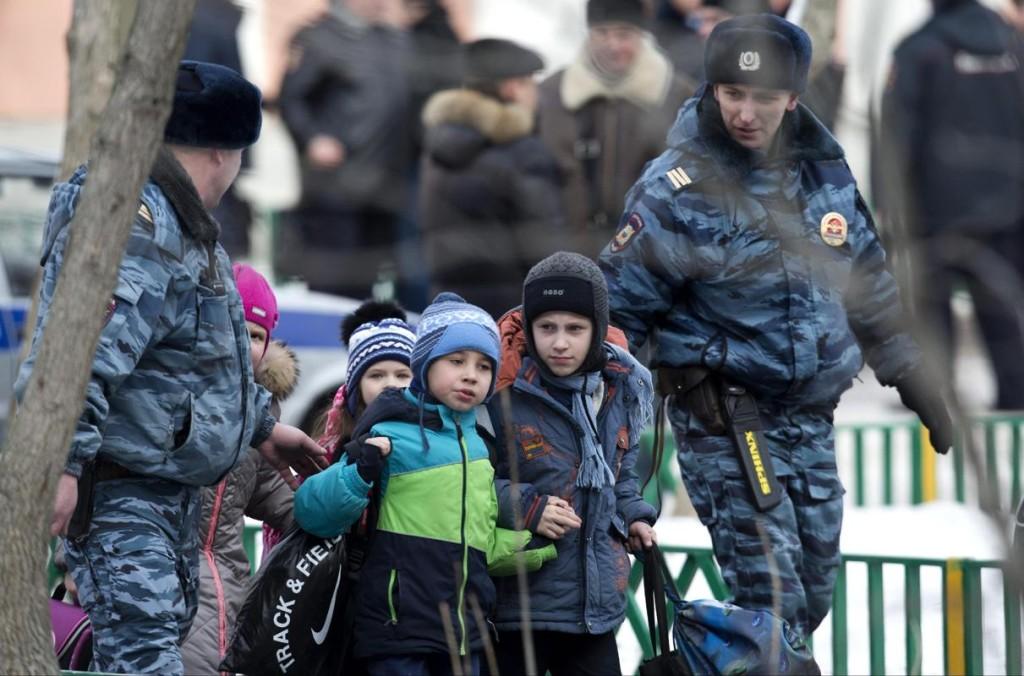 Police evacuate children from School No. 263 in Moscow on Monday.

A police officer and a school teacher are dead after a high school student took two guns into school on Monday in Moscow.

The student was able to force his way past security and went straight to his geography class where he entered the room and shot his teacher without hesitation, killing him.  It was not until his father slowly talked him out of the hostage situation in the classroom with about 20 students that the crisis came to an end.  “We were glad to see him at first – but then he shot the geography teacher,” Ivan Chekanov, a 16 year old classmate of the attacker, told Reuters. “He fired the shot, then he got up onto the podium, laid out his rifles and said he had 100 bullets and that he had come to die.”

Events such as this have sadly become a fairly regular occurrence in the United States, but something like this simply doesn’t happen in Russia.  School security was increased tremendously after a 2004 terror attack on a school by Islamic separatists that killed over 330 people.  Not to mention, the Sochi Olympics are just days away from the tragic event, and people are already on edge due to the anticipation of a possible terrorist attack or attacks on the games.  This incident is not making the people feel better.

The shooting occurred at about noon on Monday and the situation went on for only about an hour.  A motive wasn’t clear, but there are several speculations as to why the teen committed the horrible act of violence.  One of these was reported by a classmate, saying that once the shooter killed his teacher, he turned to his classmates and said that he wanted to see death because he was so afraid of it.  Another report states that he was angry with the teacher over a grade, and that was why he killed him.  “‘Why is he still alive? I killed him.”  He said, “Well, guys, your answer gets a ‘D’, and fired several more shots,” Chekanov said.

The shooting has left people with very little peace of mind going into what promises to be a tumultuous time with the Sochi Olympics.  Given the country’s tragic background with school incidents, the event has surely brought back terrible memories of possibly the worst moment in Russia’s history.  With something that has become so prominent (as painful as it may be to use that word) in the United States in school shootings, could the issue spread its way to Russia, or could this just be a fluke?  Only time will tell.