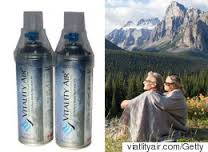 A Canadian start-up, Vitality Air, is seeing a huge demand from Chinese customers.

It’s almost like a scene out of The Lorax where Mr. O’Hare’s company, O’Hare Air, is selling bottled air to its people because beyond their city, the air is to polluted. In the end, it was all a scam but Vitality may be onto something.

The company is based in Banff, Canada, located in the Rocky Mountains. It is bottled in Lake Louise, Canada as well.

Last month, the first five-hundred canisters went on sale in China, and sold out in two weeks. Each canister sells for fourteen too thirty-two dollars, depending on the size.

The product is sold in an aluminum can and is said to enhance your performance in all activities. It works with a spray feature or a mask that you breath into.

Harrison Wang, Director of Operations in China for Vitality Air, told CNN, “Now we’re taking lots of pre orders for our upcoming shipment. We’re getting close to the 1,000 mark.”

The huge demand comes after Beijing issued their first ever Red Alert due to poor air quality. This led to the closing of school and traffic restrictions. The heavy smog is not unusual for Northern China in the winter months because of the large amount of coal being burned for warmth. However, this time it has gotten quite out of hand.

“In North America, we take our fresh air for granted but in China the situation is very different,” said Moses Lam, the company’s co-founder.

Lam got the idea when he sold a zip-locked bag of air on eBay for ninety-nine cents.

“We wanted to do something fun and disruptive so we decided to see if we could sell air,” said Lam.

Although he lives in Edmonton, Vermont, Lam often makes the journey to Banff to spend ten or more hours helping bottle the air.

He told CNN, “It’s time consuming because every one of these bottles is hand bottled. We’re dealing with fresh air, we want it to be fresh and we don’t want to run it through machines which are oiled and greased”

In Canada and the U.S., sales are mainly novelty but people in China believe the item has a true purpose.

Wallace Leung, a professor at Hong Kong Polytechnic University, told CNN, “We need to filter out the particles, the invisible killers, form the air.” He went on to say that buying bottles of air wasn’t a “practical solution to China’s air pollution.” Leung is currently studying the effectiveness of face masks as an air filter.

However, the company’s co-founder believes his products are actually very beneficial and are not in fact, a gimmick.

Lam finished with, “If China can import food, water, why shouldn’t they have the right to import air?”