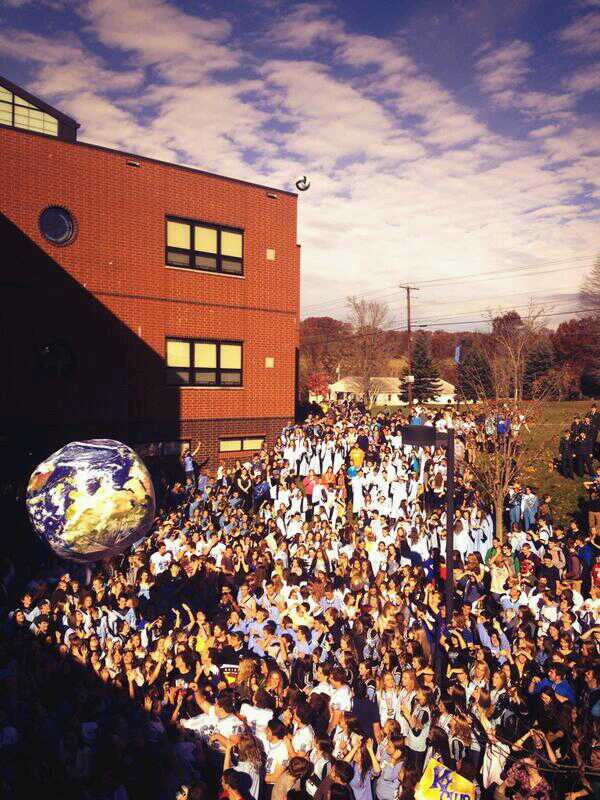 On November 6, the music of Imagine Dragons’ “On Top of the World” rang through the halls as students came together to film one epic video.

Just a little more than one month later, they won the lip dub competition run by Trib Total Media.  The object of the competition was to go throughout the school and film people lip syncing a song, in this case “On Top of the World”.  At the same time, different groups of people would line the route and display their school spirit.  The only catch was that no editing was permitted; the whole school was covered in one shot.

The route began in the main entrance of the senior high school and proceeded down the main hallway, turning right into the auditorium.  Going backstage and making a left, the camera headed into the cafeteria where a large gathering of students were, and then went through the lunch lines.  Exiting the lunch lines, the camera crossed the main hall and entered the gym where it met the band and was escorted out by homecoming king and trombone player Zach Ratkus.  The procession continued up the steps and through the hallway, heading for the doors.  Outside, a giant globe was waiting, and it was pushed down onto a large group of students.

The production took a ton of preparation by the people creating the video and the people in the video.  When asked what was done to prepare, cameraman Patrick O’Shea said, “We had to plan out the route and choreograph clubs and groups.  Practice, practice, practice.”  All that practice paid off.

Voting took place on the Trib’s website, and over 150,000 votes were cast on the region wide competition with voting open for just a little less than a month.  On December 8, Seneca took home the first prize of  five thousand dollars and one hundred well-deserved lip dub T-shirts.  The runner up of the competition was Gateway High School, who won one thousand dollars.  “It felt great when we heard that we won.  It was a tremendous source of accomplishment,” says O’Shea.

Participants in the lip dub included all Seneca Valley junior and senior students, Senior High faculty and staff, and all students in clubs and on sports teams.  The competition, however, did more than just win all these people money and tees.  When the video was first posted on the internet, the response from the Seneca students was immense.  Attempts were made to get the show on The Ellen Show, and the video received recognition from several local figures.

The lip dub was a true testament to the idea that just one small thing can bring a large group together.  For just a short period of time, there were no groups, no cliques at Seneca Valley.  Everyone was a Raider, no more no less.