Seneca student takes Best Buddies program above and beyond 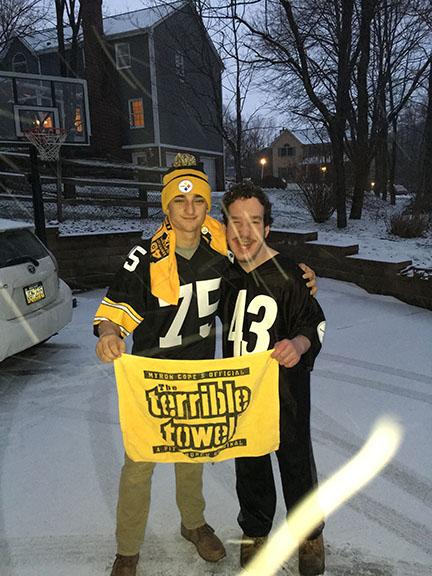 The Best Buddies program at Seneca Valley is full of exceptional students wanting to build meaningful relationships, but one student has gone above and beyond expectations.

Aidan McGinnis, a junior in the senior high, is a member of the program and has made quite an impression on his buddy Charles and the other members involved.

This is McGinnis’s first year in the Best Buddies program, and when asked about why he joined, he stated “I knew Charles from working with the Miracle League and he asked me to join the program; I agreed because I like helping kids with special needs.”  He also mentioned that he wished he had joined sooner, but is glad he is in it now.

McGinnis is also aware that being a part of the program is not just good for him, but his buddy as well.  Charles said that he has loved being a part of Best Buddies, and has made many new friends.  After being asked about Aidan, he seemed eager to say “I like having Aidan as a friend.  We go out to eat, talk on the phone, and we are together at the parties Best Buddies has. “

The two of them eat breakfast together in the IHS until 7:20 every morning, and they talk on the phone every night. McGinnis also stated that Charles was one of his best friends, and that they were very close.

Every member of the program is expected to reach out to their respective buddy, but McGinnis believes that talking to them twice a month does not suffice. “I think that Best Buddies is more than just meeting with them for the required time. If I’m supposed to be friends with my buddy, then I’m going to be friends with him, and not just during meetings. I want to be there for him all the time and I’m glad that I am.”

McGinnis is aware that students and teachers are noticing his actions, but positive attention is definitely not the reason behind his relationship with Charles. He believes that it is his responsibility to help and support Charles, and just be a good friend in general. He drives Charles places, and they watch the football games together every Sunday.

The two of them are very comfortable around each other, and even though they are connected by a buddy program, they have a natural friendship. They have witty banter, tell each other jokes, and are relatively open with one another.

McGinnis is confident that their friendship will be long lasting and will not end once they leave the Best Buddies program.