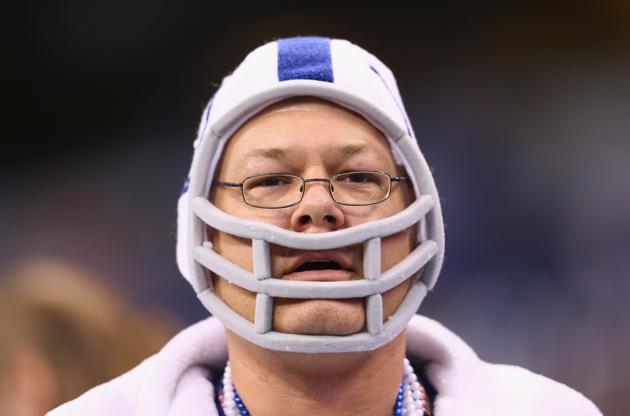 The NFL Playoffs began last weekend, and there was no shortage of thrills and dramatic finishes.

The Playoffs started Saturday, with the Kansas City Chiefs visiting the Indianapolis Colts at Lucas Oil Stadium.  The Chiefs took an early lead but suffered an unfortunate loss as Pro Bowl running back Jamaal Charles sustained a concussion.  The first half ended with things looking bleak for the Colts as they trailed 31-10.  However, the Colts came to play in the second half, and led by quarterback Andrew Luck, they made a miraculous comeback to win the game 45-44.  “One for the ages,” said Pagano, Indianapolis’ coach, to NFL.com.

Saturday saw another nail biter as the Saints traveled to Philadelphia to take on the Eagles in the extremely cold weather.  The Saints had never won a road playoff game in team history and the Eagles were lead by breakout quarterback and Clark from Benchwarmers look-alike Nick Foles.  However, a last minute field goal by the Saints’ kicker Shayne Graham propelled them to their first road playoff win by a score of 26-24.

Sunday saw a one o’clock game between the Cincinnati Bengals and San Diego Chargers that was not nearly as close as the two previous games.  Backed by an atrocious performance by quarterback Andy Dalton (giving up the ball three times by himself), the Bengals suffered a pitiful loss by a score of 27-10.  The Bengals haven’t won in the playoffs since 1990.  “It’s disappointing. All the good stuff we did this year, then to come out and not win this game kind of hurts,” Dalton told NFL.com.

The final Wild Card round game did not by any means disappoint as the San Francisco 49ers traveled to Green Bay to take on the Packers in sub zero wind chills.  The game was back and forth all evening, and as the trend had shown in the majority of the playoffs to that point, it came down to one kick.  49ers’ kicker Neil Rackers knocked a field goal through the uprights as time expired to send San Francisco to the Divisional round on the back of a 23-20 victory.

This upcoming weekend will feature some very promising action.  First, the New Orleans Saints will travel to Seattle to take on the Seahawks at 4:35.  Then, the Indianapolis Colts will take on the New England Patriots in Foxborough, Massachusetts at 8:15.

Sunday will feature the Panthers hosting the 49ers in Charlotte at 1:05 and the Denver Broncos hosting the Chargers at 4:40.