The Government Shutdown is Hurting the Country as a Whole 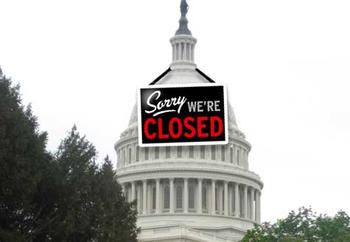 The United States’ government shut down is a hot topic in news currently this past week as the country enters its almost two week time period of having their government shutdown.

After the House and Senate were unable to resolve their differences and pass the government spending budget, the federal government has begun to stop the  non-essential services.

The majority of Republicans in Congress did not want to approve the money for Obamacare, and so they disagreed with the Democrats about the 2014 budget. Because they did not agree on a budget before the deadline, no budget was approved, and since no budget was approved, money could not reach federal employees. Without the money, the government shut down. Essential government business will continue as if the government was still working properly

The U.S. government’s fiscal year, which begins on October 1 and ends on September 30.  By September 30 of every year, the government has to agree on ways to spend federal funds. If the two parties don’t agree on how to distribute the money by October 1, everything stops.

This shut down may last from one month to three years. Until the Democrats and Republicans can compromise, the government and and all its facilities will remain closed.

The main reason for the shut down is that the Republicans did not want Obamacare, or the Affordable Care Act, to be passed. However, despite the shut down, Obamacare is helping less privileged citizens of America receive health insurance.

During the course of the shut down many facilities will not be able to be in use. Anything federally owned will be closed. All National Parks, government buildings, and other touristic attractions are temporarily closed. This leaves the thousands of people working there unemployed, which is not good for the country as a whole.

Since the shutdown, a few military troops have been killed. Normally when  a solider dies the family is sent one hundred thousand dollars to help pay for airplane expenses to see to the body as it is returned home and for funeral expenses.  But now that the government is shut down, these families are not given their money that was expected to come three days after the person has been killed. This factor just adds to the tension of the shut down.