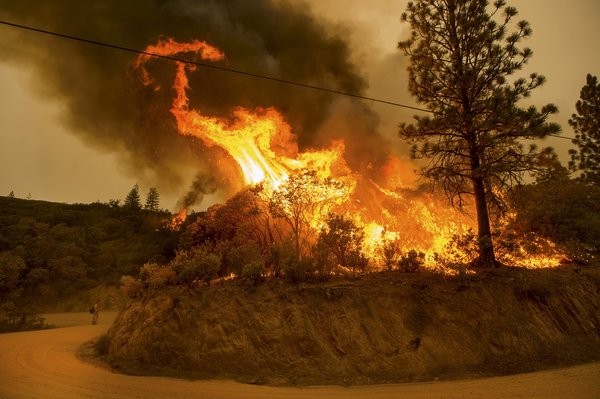 Two devastating wildfires are ripping through California, leaving a scorched path of 67,000 acres of land. Around 24,000 people have been evacuated throughout Northern California.

The counties of Amador, Calaveras, Napa, and Lake have all been evacuated and are the epicenter for this disaster. They are decimated and scorched, leaving many people homeless and not knowing where to go.

The two fires, Valley fire and the Butte fire are the largest, however there are many smaller fires that sprung up through California.

The Governor of California issued a state of emergency in those counties last Sunday, but the fires still rage on later in the week and show no signs of weakness.

The only death was an elderly women. Other than that four firefighters have been injured in Lake County, 115 miles west of Sacramento. They were then transported to the Sacramento-area burn center to be treated. They are said to be in stable condition. Around 2,500 firefighters are battling the devastation.

The fires have burned around 750 residences and hundreds of commercial buildings. It still threatens 6,150 homes however.

Joyce Reim, a resident of the town of Cobb which was evacuated, told KGO, “As we came down, just fire everywhere and all of our houses, our neighbor’s houses, our friend’s houses–everybody’s houses were burning up. It’s awful.”

A huge problem for the communities and firefighters is money. Donations are needed to help the victims of the fire, as well as for relief efforts. They can be received through Lake County Assistance program and Redwood Credit Union. The Salvation Army is also helping through “mobile kitchens” which are serving the evacuees and first responders to the fire.

The problem is containing the fire, as it is only fifteen percent contained. However, on Monday morning the containment was zero so things are getting slightly better.

An extreme drought throughout California this past year, the worst ever on record, is what led to the size and power of this fire. The Gov. of California estimates a $212 million destruction from this wildfire season.

Firefighters are hoping to contain the fire before the weekend as the temperatures are posed to rise once again.

Berlant told USA Today, “We’ve got to take advantage right now and get containment built. We will not really be able to breathe a sigh of relief until we get that containment line in place.”