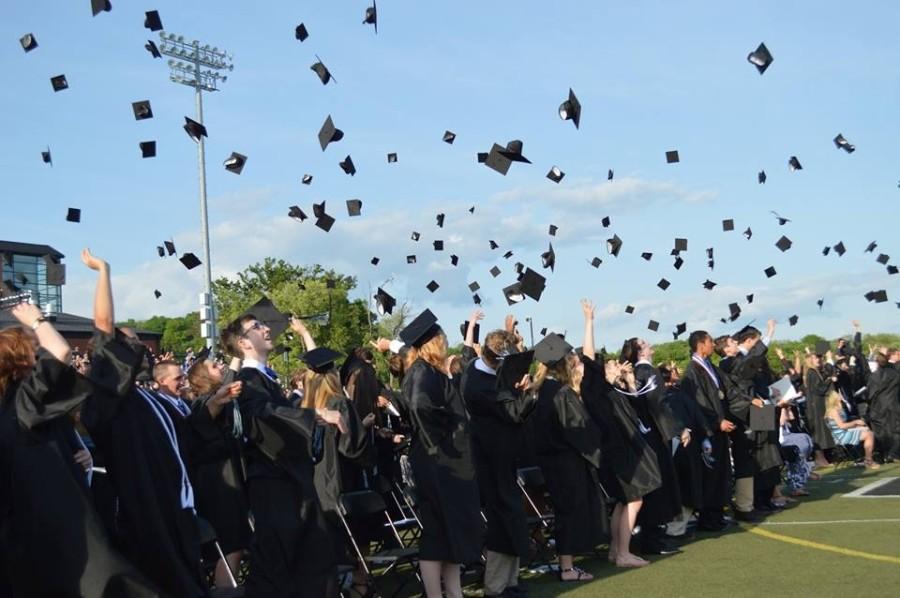 On Friday, May 30, 2014, just under 600 Raiders walked up to the stage on the turf of NexTier Stadium to receive their high school diploma.

The ceremony began at six o’clock in the evening, with all of the seniors sitting in the high school auditorium.  Then, in their caps and gowns, they made their way down to the football field, with all of their teachers, past and present, lining the way.  As they arrived in the stadium, the band played and the students were seated on the field, with their families and friends in the bleachers.

Once everyone settled in and the National Anthem was sung by the Barbershop and Beauty Shop Quartets, Senior High Principal Mark Korcinsky delivered a speech.  His speech was followed by a powerful speech made by Superintendent Dr. Vitale.  Following these speeches, the first of the student speeches was given by speaker-at-large Zach Stoner.  “I was a little nervous before hand, but when I walked down the stairs I was flooded with excitement,” said Stoner.  “And then when Principal Korcinsky introduced me, I was just flooded with a feeling of euphoria.  It was one of the most exciting things I’ve ever done.”

Following Stoner’s speech, the first six rows of graduates were called up to receive their diplomas.  After those people made their way across the stage, Jess Howard, who was third in the class ranking, made an emphatic speech where she profoundly ripped a fifty dollar bill to demonstrate her thoughts on money’s insignificance in life.  Third in the class was Daniella Ortiz, and she made her speech immediately after Howard.

When all of the diplomas were finally distributed among the graduates, student council president Jane Vandrak was called up on stage to deliver the final speech of the evening.  She gave her speech and then performed the turning of the tassel to symbolize the end of the seniors’ journey through Seneca Valley.  Then the caps were tossed and the families and friends of the graduates were let down on the field to embrace their beloved college bound young adults.

Congratulations on a job well done, Seneca Valley graduating class of 2014, and good luck in wherever you may go in life.