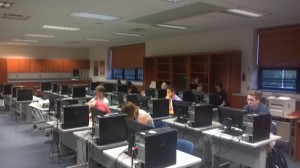 As this 2015-2016 school year is starting up, the students behind the Seneca Scout and the Seneca Arrowhead are trying to get the school’s newspaper more publicity.

Faced with the fact that not many people at Seneca Valley, students or staff, know about or read the school’s newspapers, Mr. Butschle and his students are trying to get more readership at Seneca this year. Butschle has taught English in his previous years as a teacher; however, this is his first year being in charge of Journalism/Newspaper class.

One of the marketing schemes he and his students have come up with is to change the basic name of the newspaper’s to the “News Hub.” Also, his students are going to post flyers throughout the school, create QR codes for the flyers and on staff t-shirts for students to scan that will directly take them to the school newspaper’s website. Simple things like getting on the school’s SVTV (school news broadcast) and getting on the school website are also apart of their publicity scheme. The SV newspaper staff’s t-shirts will feature a logo designed by students attending Seneca Valley high-school. A couple of artists at the senior high are creating drawings to become the logo of SV newspaper.

The previous Journalism and Newspaper teacher, Ms. Rice, had taught those classes for four years but as her position switched at Seneca, she stated, “I do miss it(teaching journalism) but considering my new position, it’s what’s best”.

Ms. Rice became the Graduation/Senior Project Coordinator, making her want to be “more hands on with the seniors in their English courses”. This is why she is now teaching Modern Humanities instead of the journalism courses. She also stated, “I endorsed Mr. Butschle for the job, he has a degree in journalism.”

When asked what Ms. Rice thought of the scheme to get the newspaper more publicity, Rice said, “I think it’s a fantastic idea, the more it’s out there the more readership it’ll have.” “The social media route is great, it’s out there now, the school used to be hesitant about social media.”

This year’s staff at the Seneca Scout/SV Arrowhead are really trying to make a big push for more readers of the newspaper. Through social media or school-wide advertising and a new teacher leading the, as well as many other ideas coming from room 218;  there is not a better time to get the word out about the exciting news hub.