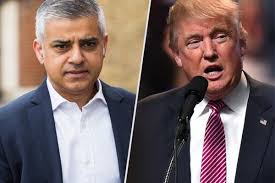 London’s new mayor, Sadiq Khan, criticized presidential candidate, Donald Trump’s take on Islam and how it could make the U.S. and the U.K. “less safe”.

Last week, Khan was elected mayor of London, which makes him the first Muslim mayor of a Western capital city.

Sadiq made his comments in a response to Trump’s proposed ban on Muslims entering the United States and how Trump would in fact allow Khan to enter.

The mayor said in a statement, “Donald Trump’s ignorant view of Islam could make both our countries less safe — it risks alienating mainstream Muslims around the world and plays into the hands of the extremists.”

On Monday, Trump told the New York Times he was “happy” that Khan was elected mayor. The Times asked him how the presidential candidate planned on enforcing the ban with Trump replying: “There will be exceptions.”

Trump also stated, “I think it’s a very good thing, and I hope he does a very good job because frankly that would be very, very good.”

In November (right after the Paris terror attacks), Trump was criticized for calling for “a total and complete shutdown of Muslims entering the United States until our country’s representatives can figure out what is going on.”

During Khan’s campaign for mayor, he would consistently accuse his opponent (Zac Goldsmith) of “drawing from the Donald Trump playbook” when targeting his religion.

Khan told Time magazine Monday, “”I think to try and look for differences, to try and turn communities against each other is not conducive to living successfully and amicably.”

Khan stated that if Trump does indeed win the election, “I’ll be stopped from going there by virtue of my faith, which means I can’t engage with American mayors and swap ideas. Conservative tacticians thought those sorts of tactics would win London and they were wrong. I’m confident that Donald Trump’s approach to politics won’t win in America.”

Trump has in fact made comments that Britain has “a massive Muslim problem.” However, a public U.K. petition to ban Trump for his hate speech has gained nearly five-hundred thousand signatures.

In January, the British parliamentarians held a non-binding debate on the issue with one debater saying, “I don’t think Donald Trump should be allowed within one-thousand miles of our shore.”

Trump has raised many eyebrows in this election and it seems that his statements are already having a negative effect on America’s foreign affairs. If he is indeed elected though, London’s mayor definitely won’t be here to see it.