SB50 Pregame: Will Manning be able to take down ‘Super-Cam’? 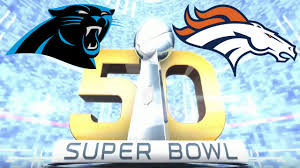 This weekend will mark the fiftieth anniversary of the Super Bowl.

The highly anticipated game will be played between the Denver Broncos and the Carolina Panthers in Santa Clara, California. It will air on CBS this Sunday at 6:30 PM.

The Broncos are led by Veteran QB Peyton Manning, and have a forty four percent chance of winning according to the FPI (Football Power Index).

Denver’s team has an explosive defense which has only allowed an average of sixty four rushing yards a game this postseason. Their defense has also surrendered a league-low of 3.3 yards per rushing attempt.

The powerful defense is headed by star cornerbacks Aqib Talib and Chris Harris Jr., both of whom were pro-bowl selections.

Manning said in an interview with ESPN, “Like I’ve said from the get-go, our defense has gotten us to this point. Let’s make that very clear.”

This season, the Broncos’ star-studded defense has beaten Joe Flacco, Teddy Bridgewater, Ben Roethlisberger, Matt Stafford, Aaron Rodgers, Jay Cutler, and has twice beaten Philip Rivers and Tom Brady. These are arguably some of the best quarterbacks in the league, maybe even all-time.

As for the Broncos’ offense, they went 11-4 in the regular season with two different quarterbacks. They have also beaten five teams that  made this years playoff and are the first team to overcome a fourteen point deficit or higher and win against three teams that eventually made this years’ playoffs (Bengals, Chiefs, and Patriots).

The Panthers (15-1) started the season with an explosive win and have been churning ever since (except for a loss to the Falcons).

Quarterback Cam Newton has thirty-five passing touchdowns and ten rushing. In his career, he’s had forty-three rushing touchdowns, tying him for the most ever by a QB. The Broncos may have a skilled defense but nobody has yet had an answer for Newton thus far. If they can stop Newton, they may have a good chance.

Cam is also expected to win the League MVP for his near perfect performances this season.

Their powerful offense also put up thirty-one points against a number two Seahawk’s defense and also routed Arizona’s number five defense in the NFC Championship game. Newton isn’t the only “X-factor” on the offense though. Wide Receiver, Tedd Ginn Jr. has a career record ten touchdown catches, and running back Johnathon Stewart has 989 rushing yards along with six touchdowns this season. Rookie Devin Funchess from Michigan has proved to have been a solid pick throughout the season. The six-foot-five receiver was called upon when veteran Kelvin Benjamin got hurt in the preseason and has done a good job filling those massive shoes. Among others, they also have veteran tight end Greg Olsen in the mix so expect him to get the ball often.

Their defense has a league-best twenty-four interceptions this season and is currently the number six defense. On the defensive side, they’re led by powerful defenders such as Luke Kuechly and Josh Norman. These two have played a major role in only allowing one one-hundred yard rusher this season in Jaamal Charles.

The matchup should prove to be an exciting one with a strong defense in Denver and an explosive offense in Carolina so be sure to tune in Sunday.