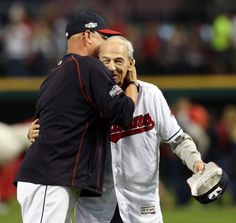 Cleveland, Ohio – For a part of his Big-League career, Tito Francona played for the Cleveland Indians.  He spent six years there as an Indian, and loved every second of it.  As the Postseason nears, Francona reflects on both his time playing in Cleveland and now his son Terry’s time at the helm of this electric Indians team.

Francona first came over in 1959 as a part of a trade from the Detroit Tigers and played for the Indians until 1964.  He felt that his home was in Cleveland and it was a good fit for him, as he proved that to be right in his first year as an Indian.  Francona hit .363 with a career high 20 home runs and 79 RBI during his first season in the Cleveland uniform.  When asked what it was like to play in front of the Cleveland crowd at home, Tito Francona said that the atmosphere was great and, “just what I wanted at the ball field.”

While playing with the Indians, Francona said that the hardest pitcher he ever faced was the now-Hall of Famer Whitey Ford.  When looking back on some of his At-Bats against Ford, he mentioned that, “He used to always laugh at me when I’d come up to bat, he’d crack my bat.”  Francona then thought of a new method when facing Ford, “I never used my bat batting against him, I’d use the pitcher’s bat.” Letting off a couple chuckles after giving that insight, Tito Francona also mentioned that his favorite teammates in Cleveland were their right fielder and the very popular Rocky Colavito, along with one of their pitchers, Herb Score.

As the 1965 season came, so did new management in Cleveland.  The new skipper, Birdie Tebbetts, brought in “his type of players” and got rid of some of the players from the previous season including Tito Francona.  When asked what it felt like after he knew he was traded, Francona replied, “I really felt brokenhearted. Everything was going so good there and I wish I would have been there longer.”

About fifty years after Tito Francona last played for the Indians, his son Terry, who played 10 years in the MLB, was up for a managerial job after he and the Red Sox decided to part ways.  Terry called his father to discuss some of the teams that called and were interested in hiring him.  When Terry asked his father about the Indians, Tito Francona said, “Cleveland, all the way Terry, you’ll find the atmosphere there is great.”  And with that, Terry Francona signed with the Indians and the rest is history.

In his first five seasons as the Indians’ skipper, Cleveland has clinched a playoff berth three times and won their division two years in a row, 2016 and 2017.  In addition to this, he took his team to Game 7 of the World Series last year against the Chicago Cubs.  In that game, the Indians were down three runs in the eighth inning with arguably the hardest throwing pitcher of this decade and the virtually unhittable Cubs closer on the mound.  They cut the lead to two runs, and then Rajai Davis came up with a runner on second and hit one of the loudest and most unbelievable home runs of all time to tie it.  Looking back on that game, Tito Francona believed the Indians were going to complete the comeback saying, “I thought we were going to win that game” also adding, “That drove them crazy in Cleveland.”  Even Drew Carey, former host of The Price is Right and star of The Drew Carey Show, who was in the same suite as Francona, said emphatically, “We are gonna win now! We are gonna win!”

Unfortunately, as the record would show, the Indians were unable to complete the full comeback and would end up losing in ten innings.  However, this does not take away from what Terry has done with this team.  Taking over a losing team, at the time, and bringing them back to prominence within his first four seasons – that’s not easy to do.  And that just adds to the list of what makes Terry one of the best managers to ever do it, and who knows? Without Tito’s experience and wisdom, maybe none of this happens. If it wasn’t for Tito giving Terry the early experience in Cleveland of being in the clubhouse and having a feel for Major League Baseball, Terry might not have been interested in baseball.  But there is one thing for certain, this family loves Cleveland and the city loves them just as much, if not more.